Creating a Network for Children and Families to Rely on

Creating a Network for Children and Families to Rely on

A roadmap for success

Austin, Minnesota has always been home to a wide range of early childhood programming and resources. Story hour is held at the local library, the YMCA offers youth programming, and Early Childhood Family Education organizes classes for families, among many other activities happening around the city.

Despite this activity, in the early 2000s, local early childhood leaders knew that more could be done to support children and their families in Austin. Parents were expressing confusion about what early childhood services were available in the community. Many children were unable to attend preschool because their parents couldn’t drive them there. Families were having difficulty affording child care. 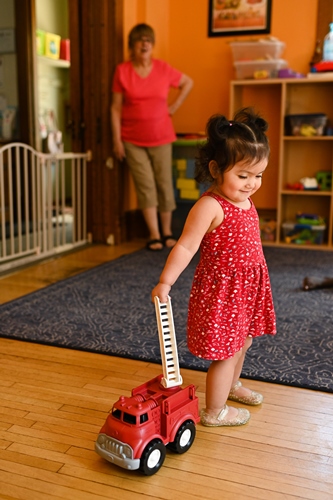 After learning about a new opportunity through Southern Minnesota Initiative Foundation (SMIF), these leaders decided to come together and form an Early Childhood Initiative (ECI) in 2004. “The ECI provided an opportunity to explore early childhood in our community, to look at what are the needs, what are the gaps,” said Amy Baskin, director of United Way of Mower County at the time. The ECIs started as a program among all six Minnesota Initiative Foundations in 2003 with the goal of ensuring that every young child in Greater Minnesota has the best possible start toward a healthy life of learning, achieving and succeeding. SMIF facilitates community visioning sessions to ECIs in its 20-county region, then provides funding for project implementation.

Through the community visioning process, the Austin ECI began identifying effective ways to partner in order to address issues impacting children and families. The Southern Minnesota Area Rural Transit (SMART) began providing bussing and scholarships for reduced or free rides for the families of preschoolers who needed it. The ECI also created a program to increase the number of families able to afford child care through community assistance. 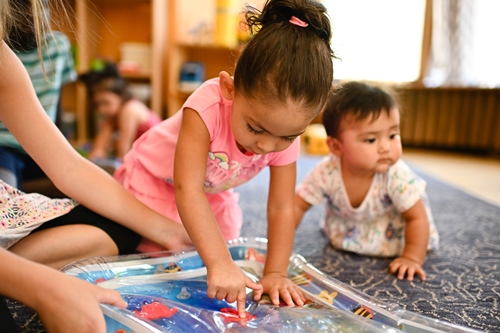 The visioning process also shined a light on the fact that despite the wealth of strong early childhood care and educational experiences, many families with young children were not aware of the programs and services available in Austin. “A family didn’t even know where to turn to get early childhood resources,” said Baskin. The coalition began working towards consistency in their messaging and better accessibility of information for parents in the community. They developed parent education packets, multi-media Public Service Announcements, and made sure materials were available at key locations in town. Most of all, they learned to rely on each other for the betterment of the community, instead of working in silos.

What the coalition did not know is that they were creating a roadmap to address important community-wide issues in the future. “This work allowed us to establish a basis to understand the needs of our community,” said Baskin. 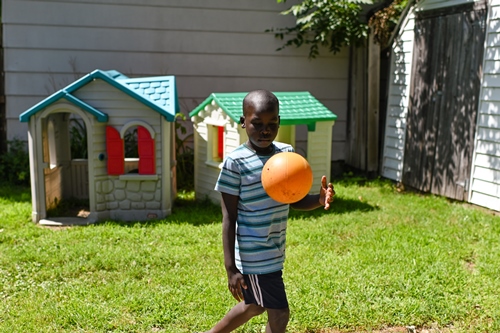 Because of the work that had already been done to bring early childhood programming and resources together through the ECI, the coalition was well prepared to support immigrant families. “As our community started to diversify, it was really easy to get programming in place to address certain cultures who had maybe been in refugee camps and didn’t understand or have the resources to know to get their children involved in early childhood programming,” said Baskin.

Access for families with language and cultural barriers was a major issue that was identified early on by the ECI. “As a community, we really have to be thinking about access and transparency about what early childhood programming looks like for families,” said Amy Goette, Early Childhood Family Education Coordinator for the Austin Public School District. “Whether that means materials being translated in different languages or having interpreters available or just being upfront about what our program can offer families, it’s important to be aware of differences so everyone in Austin has access to the same information.”

Alongside these rapid demographic changes, something else was transforming the community as well: the lack of child care availability. The child care shortage is an issue that the entire state of Minnesota is wrestling with. Two-parent households that would like to have both parents working, but lack child care, end up having to make the choice between career advancement and family well-being. Parents sometimes choose to withdraw from the workforce or move to a different community where they can find child care. Single-parent households face even more difficult choices when child care is unavailable. 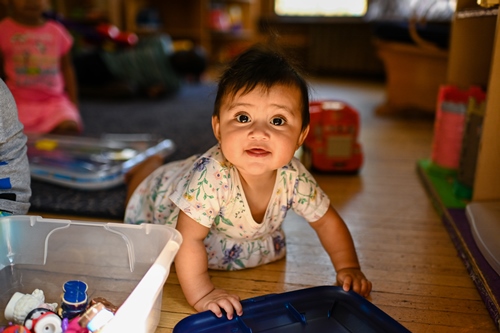 In 2018, SMIF supported a “potential need analysis” of child care for southern Minnesota, which was conducted by long-time partner in early childhood work, First Children’s Finance (FCF). The results show that SMIF’s 20-county region has a potential need of 8,616 licensed child care slots. Austin is short 847 slots, a number that nearly doubles when taking the surrounding area into account, making it the highest-need city in southern Minnesota. “We have a lot of second and third shift work in Austin and only one place in town that offers support as far as day care to help those families,” said Goette. “It’s a barrier and affects early childhood needs and what we offer as services to the community.”

A local group formed of area employers, county and city staff, child care providers, parents, and community leaders who had their roots in the ECI, began meeting in 2017 to determine the seriousness of this issue in the Austin community. They worked closely with FCF, with support from SMIF staff, over an 18-month period to learn more about the direct impact of the shortage on Austin, and to start the process of meeting with those who could help change the tide. They learned that families were working split shifts to avoid needing child care. Others were taking longer child care leaves and juggling their leave with spouses to be home with their infants for the first year because of a lack of child care. Then SMIF announced a new grant opportunity in 2019 called Communities Addressing the Child Care Shortage. 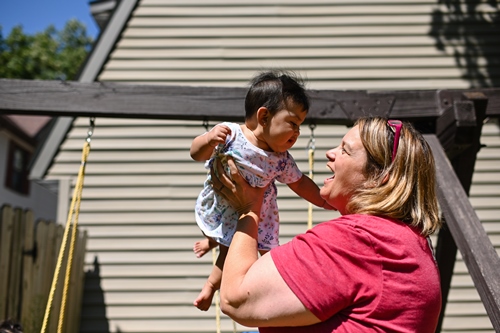 SMIF is currently working in Austin – one of five communities chosen for this process. SMIF facilitates community meetings and supports the development of unique solutions that can eventually be implemented with funding from the grant. The Austin team has been working with SMIF for several months, and they have already begun exploring various ideas for how to address the shortage, propelled forward by the foundation they had previously laid with FCF. They started a forgivable loan program to help new providers pay for their startup expenses and worked on finding underutilized space in the community that could be used for child care. They are also discussing the importance of educating first time parents on what they should look for in child care and are researching the need for culturally diverse child care. “We want to make sure we’re providing multiple solutions for what makes sense for different families, not just one solution,” said Sheri Dankert from The Hormel Foundation, one of the child care shortage grant core team members.

While the child care shortage has proven to be a complex issue that is slow to change, Dankert feels that with the support from SMIF and FCF, they will be making important headway on increasing the number of child care slots available over the next couple of years. “We’re really just on the bubble of something bursting to have an impact on our community,” she said.

Collaborating for a bright future

Over the years, the ECI has grown from a group that would meet independently to confer about early childhood issues, to being largely collaborative and heavily embedded in the community at large. Many of the initiatives of the original ECI have flourished into sustainable programs that are moving the needle on important issues in Austin. 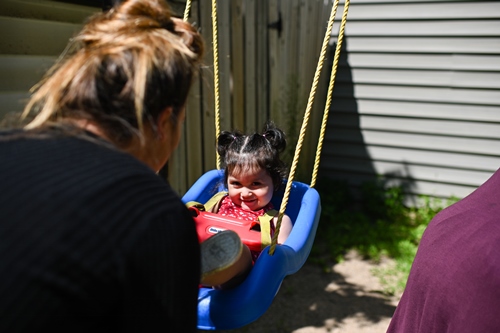 “One of the direct programs that came out of the ECI was a literacy team,” said Baskin. “There were a lot of different groups doing literacy work – Kiwanis, Rotary, Mayo – all doing different things.” The Austin Early Literacy Group meets throughout the year to communicate about the work they are each doing and also organizes a joint literacy program at the library. The team also started a free summer reading program at the local reading center.

The Preschool Collaborative is another very active group with roots in the ECI which brings together preschool professionals on a regular basis. The group organizes an event to showcase what they can offer for families, with the goal of making it very clear and transparent when registration dates are, the cost of programming, and what is available at each preschool. They even have interpreters at the event. “We work hard to really have common language and common objectives between groups of what we want all of our kids to have in the community before kindergarten,” said Goette. Among other things they are working to provide early childhood screening throughout the preschools. “We want to make sure that all kids are ready for kindergarten and that we as a community can either teach or assist with families.”

The Austin Public Schools, which were heavily involved in the ECI, have continued to receive funding over the years to support new initiatives. In 2013 they received a SMIF Incentive Grant for $11,218 to support training community members on how to adequately prepare students for kindergarten and future school success. “SMIF is always there to help,” said Goette. “They’re a fabulous resource, and the programming that we have received grants for has been amazing for families and our preschools.” 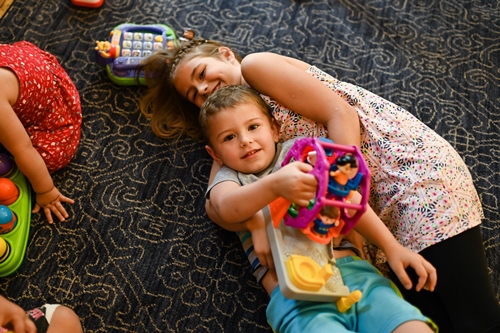 The ECI has become so incorporated into the community that members have been tapped to help shape Austin’s future. In 2011, a group of local leaders formed Vision 2020 to chart a course for Austin’s future. They collected ideas from community members and from there, multiple focus groups were created. “Early Childhood was one of the focus groups, so anyone who was involved in the ECI was invited to participate,” said Baskin. The Early Childhood group, which included members of the ECI, helped form a nonprofit called Austin Aspires which supports community members from cradle to career and is recognized as a leader in education in the community. In 2017 Austin Aspires received a $2,300 SMIF Incentive Grant to support kindergarten readiness.

The spirit of collaboration is alive and well in Austin’s early childhood programming. Thanks to years of building a coalition of partners, Austin families now have a network that they know they can depend on for their children’s overall wellbeing and future success.

This story is from SMIF’s 2019 Impact Report. To read the other stories from the report, and to view maps showing the impact of these programs, visit smifoundation.org/impactreport.