Moving The Needle On The Local Foods System

Home/Stories/Moving The Needle On The Local Foods System

Moving The Needle On The Local Foods System

It started with a jacket

Kim Olson’s money is in jars – literally. Her business, Grandma’s Gourmets in Albert Lea, specializes in unique jams, pickles, and salsas with colorful names like Bloody Pickles, Road Rage Jam and Grandma’s Dills. As the name of her business implies, many of Olson’s recipes originally came from her Great Grandma who was pickling and making jam in the 1890s.

Grandma’s Gourmets has grown rapidly over the past few years. Olson credits the scaling up of her business with being in the right place and talking to the right people. She cites her experience as a vendor at the 2015 FEAST! Marketplace as a pivotal moment for her business. The marketplace is a tradeshow experience for food-makers and farmers from southern Minnesota and the surrounding areas to make sales to retail and food service buyers, and the general public. Olson, never one to be afraid to talk to strangers, saw a man wearing an Iowa jacket who was walking by her booth and said, “Hey, how about those Hawkeyes.” The two started talking, he tasted some of her samples, and two weeks later her product was in a Hy-Vee store in Rochester.  The man in the jacket was the store director.

From there, things have only snowballed. She now has products in 30 stores, has started a wholesale and catering component of her business, and has won multiple awards. However, Olson is still surprised that she is making a living from her pickles and jams. “That was never the plan.” 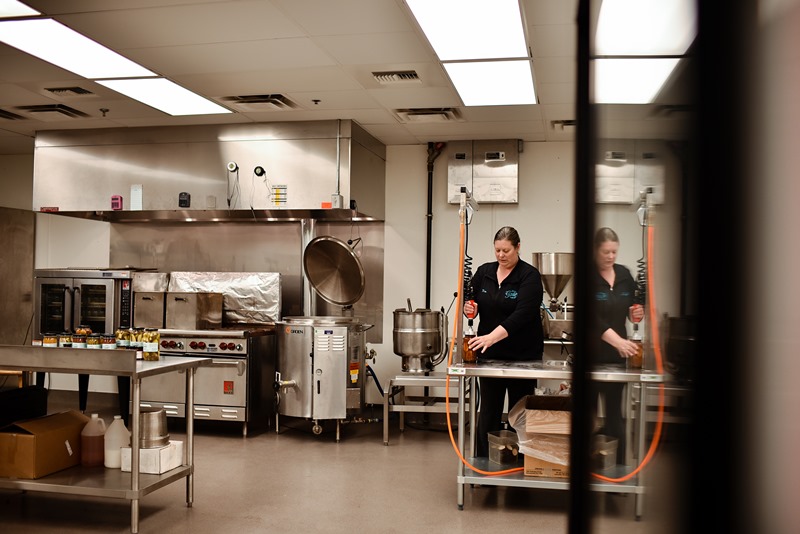 From side business to career

In 2009 Olson was recovering from two back surgeries and was on leave from her job in restaurant management. She started selling homemade baked goods at the Albert Lea Farmers’ Market in order to make some extra money.

Olson quickly learned that breads and pastries do not keep long, and had to throw away quite a lot of food at the end of each market. She decided to start making jams instead, a skill she learned in 4H when she was little. Then Minnesota passed the Pickle Bill, now the Cottage Food Law, which allows the limited sale of some home canned goods. This opened new doors for Olson, and she started selling pickles and salsa. She expanded her market reach to the Austin Farmers’ Market and the popular Thursdays on First in Rochester.

By that time her house was covered in jars, to the point where she had to create pathways in her hallway in order to walk from one room to another. She would work all day until midnight just to process 50 pounds of cucumbers into pickles since only a small amount fit into her canners. She knew this situation could not last. “I told my husband that either we are going to find a commercial space to rent, or I’m going to find a job in what I went to school for,” she said. He encouraged her to pursue the business so she decided to rent kitchen space from the Albert Lea Business Development Center.

The move to an industrial kitchen came with the added benefit of being able to run two canners at a time instead of just one. She went from making 7 pint batches at home to 48 pint batches in the new space.

When Olson met the Hy-Vee representative at the FEAST! Marketplace in 2015 “that changed everything.” She created a relationship with Hy-Vee which is now the bulk of her business. “It’s all about relationships,” she said. “Hy-Vee is a good cheerleader for me.” One of the Hy-Vee locations that she approached did not have anywhere to put her product, so her husband offered to build them a shelf for her items. Now these custom-made shelves are a staple of her brand in all of the Twin Cities Hy-Vees. In addition to the Hy-Vee connection, Olson also met buyers from Just Foods Co-op and Lake Winds Co-op at the Marketplace and has been selling her product at those locations as well. 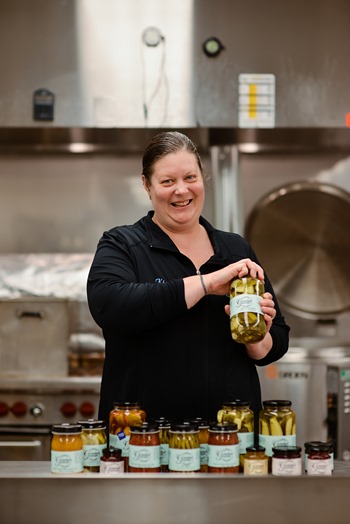 The Marketplace event is one of several components to the FEAST! Local Foods Network which is comprised of many organizations, businesses, and individuals committed to growing a sustainable, local and regional food system. The network started with a partnership between Southern Minnesota Initiative Foundation (SMIF) and Renewing the Countryside in 2013 with the purpose of supporting local food producers and food-makers by boosting access to financing, resources and peer-to-peer learning opportunities. Olson has been involved in nearly every FEAST! opportunity.

Almost immediately after her first Marketplace event, she got an email from a contact at SMIF asking if she would be interested in joining the FEAST! Local Foods Peer Group. The peer groups are comprised of about ten regional local foods entrepreneurs that meet at SMIF once a month to share their ideas, struggles and successes. “It makes me think about things differently,” said Olson. The peer group conversations help shape business plans, and creates a comfortable environment for asking burning questions about how to run a business with people in similar situations. Olson often calls her peers for advice, or offers advice of her own.

Then Olson learned about the FEAST! Smart Start Initiative, a technical assistance and coaching program for food businesses. Through the program she was paired with a coach, Mariah Lynne, who is the owner of Good Steward Consulting in Albert Lea. The two met frequently over a six month period to discuss how to overcome her business challenges and take chances even if Olson was afraid. “She pushed me and kept on going,” said Olson. “Mariah encouraged me to hire people and all of a sudden I had a demo person.  All of a sudden I had all of these things that I didn’t think I could afford before.” Because Olson took those chances, Grandma’s Gourmets now has 7 employees.

The growth in her business prompted Olson to apply for a loan from SMIF. In addition to building her inventory (more jars!), she was able to purchase a 40-gallon kettle to increase her production, and a capper which tightly seals a specific type of lid called “lugs.” 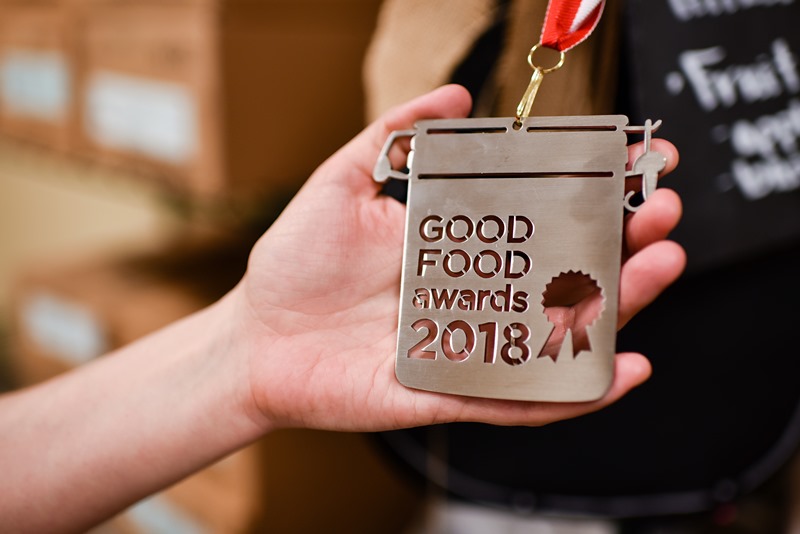 Olson has always thought outside of the box with her recipes and likes making people think differently about food. Six years ago she was making things that no one else was doing, like pickled carrots, but now her flavor ideas are more at the forefront. In 2015 she entered into the Good Food Awards in San Francisco. While she didn’t win an award, she did win over the taste buds of a buyer from Williams Sonoma, and now her products are in the Twin Cities location. In 2017 she entered the contest again, and this time she won for her Spicy Maple Bread and Butter Pickle, and in 2018 she won for her Bloody Pickles.

As Grandma’s Gourmets has grown with Olson’s involvement in the FEAST! Local Foods Network, she has also seen growth in the vitality of the regional food system. “I think it’s more prevalent,” said Olson.  “FEAST! brought local foods to the forefront. It was kind of invisible before. FEAST! helped give southern Minnesota companies more access to important networks.”