Moving The Needle On School Readiness

Home/Stories/Moving The Needle On School Readiness

Moving The Needle On School Readiness

On any given day at the Lake Crystal Wellcome Memorial Elementary School in Blue Earth County, you will find kids crawling on the floor, jumping on a trampoline, walking on a balance beam, and spinning around with arms wide open. What might look like play time is actually a highly structured program called S.M.A.R.T. that helps children prepare their brains and bodies for academic success.

S.M.A.R.T., which stands for Stimulating Maturity through Accelerated Readiness Training, is a series of movements that focus on the stimulation of the brain stem. Young children’s brains are typically not prepared to learn once they enter school. They often struggle to sit still in their seats, or can’t move their eyes back and forth across a page, making it extremely difficult for them to learn. Stimulating the brain stem through S.M.A.R.T. movements helps develop those automatic functions, leaving room for the cortex to do the important work of comprehension and analysis.

Kim Kleven, the Early Childhood Coordinator at the school, explains that when most people think of school readiness they are expecting a greater emphasis on academic learning, which she sees as counterproductive. “What I love about S.M.A.R.T. is that this is what kids need,” says Kleven. “This is a chance to develop muscles correctly so they can sit up in a chair. It’s the structural development part that we should be focusing on – it’s the foundation, it’s the readiness skills, that’s what we should be doing in early childhood, not so much academic skills.” 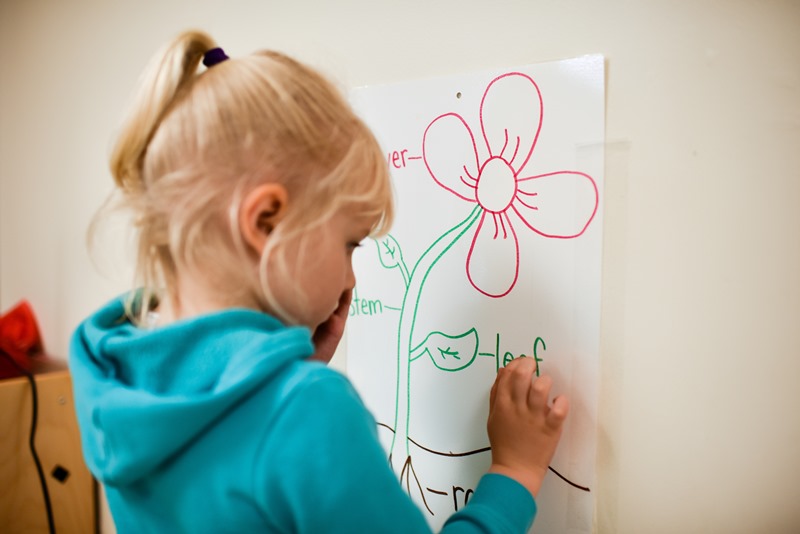 In 1979, Bob and Kathy DeBoer had a little girl named Jesse who was born with a significant brain injury. This prompted them to embark on a nation-wide search for people who were making change in brain development. After endless hours of research and working with many therapists, they eventually came across the work of Art Sandler, a PT who concretely explained why and how the brain develops through movement. Jesse eventually began to walk with ease and even speak due to her progress with Sandler’s program.

Buoyed by this success, Bob and Kathy decided to bring Sandler’s program to other families to help more children reach their highest potential. In 1983 they, along with a group of parents, officially founded A Chance to Grow (ACTG) in Minneapolis which led to the development of a variety of services in the brain development arena including vision, auditory, and neurotechnology services. 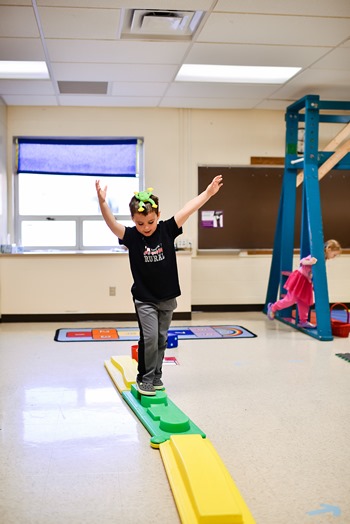 Cheryl Smythe and Jessica Kittleson lead the S.M.A.R.T. program and trainings at A Chance to Grow. “Each S.M.A.R.T. exercise serves a specific purpose for brain stimulation,” said Jessica. “Vision activities, for example, are designed to stimulate the development of the eyes, which is vital for reading.” In many of the vision exercises, kids work on tracking while they trace a finger along the outline of a picture. Another popular tracking exercise involves pushing a tennis ball that hangs by a string from the ceiling. The kids keep their eyes on the ball as it moves around, promoting their ability to read smoothly along a line of text.

Body awareness is another important component of S.M.A.R.T. When a child walks slowly across a balance beam, their body is learning where it is in space which ultimately helps kids sit still and remain seated in their chairs. The alligator crawl is an exercise where kids lie on their stomachs and reach forward on a mat at the same time that they push with their feet, slowly moving their bodies across the floor. This helps with practicing bilateral coordination, which indicates that both sides of the brain are communicating effectively and sharing information. This skill is necessary to complete tasks such as tying shoes and writing.

Many of the exercises also incorporate academics, like reciting the alphabet, counting numbers, or reading words simultaneously. For example, kids will jump on a trampoline and at the same time recite letters that are posted on the wall. Research proves pairing movement with learning increases retention. Teachers report this strategy not only works but is also a kid pleaser.

The beauty of S.M.A.R.T. is that it is easily accessible. Teachers can adopt it to their style, budget and the needs of the students and the classroom. “A balance beam can be blue tape on the floor, or a yardstick,” said Kittleson. “It doesn’t have to be expensive equipment – it will still provide stimulation either way. The goal is to get kids to slow down – build balance and coordination.” 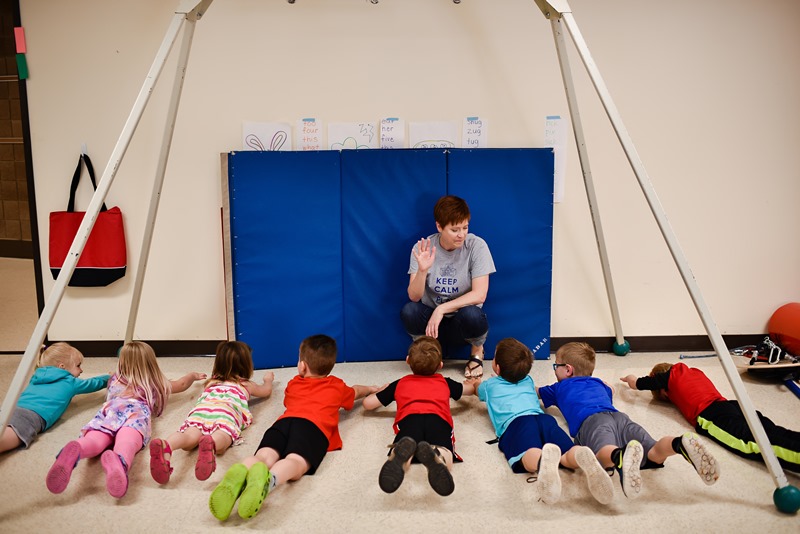 The S.M.A.R.T. workshops started gaining steam over the years, but ACTG knew they were not reaching as many teachers in Greater Minnesota as they could since the workshops were held in the Twin Cities. As one teacher from Austin put it, she could train eight of her teachers if it was held locally, or she would have to limit the training to two teachers if they had to go to the metro due to prohibitive travel costs.

In 2013 ACTG received an Incentive Grant from Southern Minnesota Initiative Foundation (SMIF) to hold workshops across the region in addition to directly implementing S.M.A.R.T. in nine schools across southern Minnesota. “We knew there was a real potential to work in rural Minnesota,” said DeBoer. “Fortunately for us we were working with SMIF. It is absolutely refreshing to be working with a foundation that is open-minded to new ideas and willing to explore what’s possible.” In that first year 66 teachers were trained. Since that time, ACTG has received multiple Opportunity Grants from SMIF, in addition to support from Otto Bremer Trust, to hold regional workshops nearly every year. To date, they have trained 361 teachers from 88 early childhood programs in southern Minnesota through the support of $105,000 in grants from SMIF. 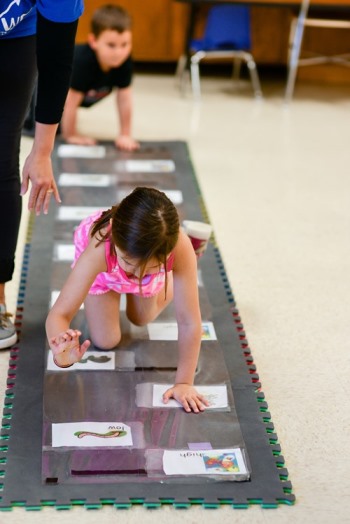 Alisha Prange teaches Pre-K 4 to 5 at the Lake Crystal school. She and three other early childhood staff members at the school were able to attend one of the workshops in 2015 because of the discounted rates that a SMIF grant supported. Before learning about S.M.A.R.T., Prange was frustrated that the academic skills she was trying to teach her kids were not sticking. When she attended her first workshop she completely reframed her thinking as a teacher. “S.M.A.R.T. made me realize that a child’s brain and body have to be ready before skills can be retained,” said Prange. “Doing S.M.A.R.T. every day has really gotten my children ready for learning so they are more capable of picking up these school readiness skills. They’re more prepared for the next step of their lives.”

When they started out, Lake Crystal teachers were implementing S.M.A.R.T. in the hallways. As a testament to the school’s dedication to this program, they eventually integrated a S.M.A.R.T. Room into their building remodel in the early childhood wing. The school serves around 115 children ages three to five in their School Readiness program. Each class spends 20 minutes a day in the S.M.A.R.T. room and also performs small motor activities in their classrooms throughout the day.

Dan Beert, the school Principal, has supported the program since day one. “Kids are so much more ready for kindergarten academically, socially, and emotionally,” said Beert. “A lot of kids struggle with the transition from preschool to kindergarten. This changes that.”

The teachers have seen S.M.A.R.T. help in other ways too. Most struggling readers have a visual tracking issue, and the tracking exercises have helped identify visual issues allowing for early intervention. “Our literacy scores have jumped tremendously because of implementing S.M.A.R.T.,” said Prange. “We have noticed big growth in those scores and we attribute that to implementing S.M.A.R.T. in our preschool program.”

“Out of all of the things we’ve tried, they’re so much more ready for kindergarten because of this program,” said Beert. “We want to see it keep growing. Kids are set up more for success and they feel more confident.” 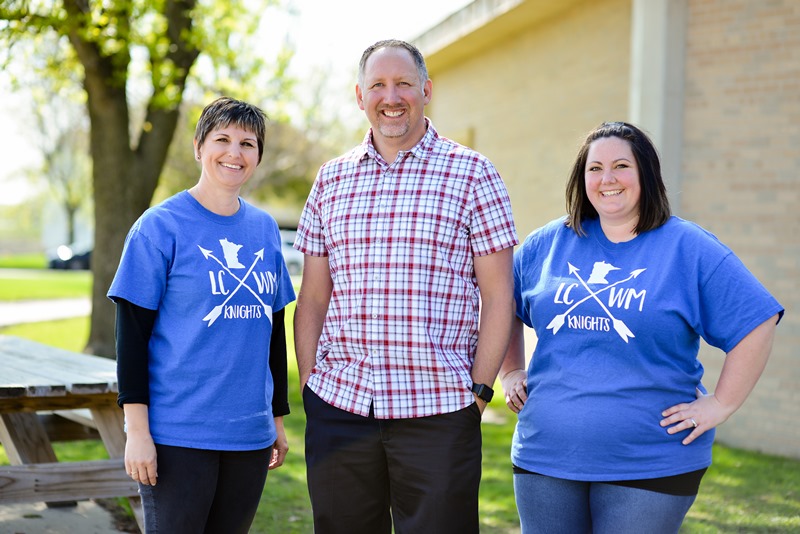 “This program is moving the needle to where early childhood needs to be. If it could be a foundation in every school it would make a huge impact on our children’s abilities to be learners.”

Since the S.M.A.R.T. program started, ACTG has trained 6,000 teachers from 13 states, primarily in Minnesota. However, their unique approach in southern Minnesota has started snowballing to the point where the S.M.A.R.T. program is becoming embedded as part of the educational structure in the region. The primary reason for this shift is the emphasis on mentorship that many teachers have received in our region.

“Most people just get training,” said Kittleson, “but southern Minnesota also gets long-term mentoring, which makes it sustainable and more of a community.” Through the latest round of funding from SMIF, professionals from ACTG are able to go out to the schools and work directly with teachers during a three year mentorship program. So far, ACTG is actively providing the mentorship service in 15 communities with 53 teachers participating in the program. 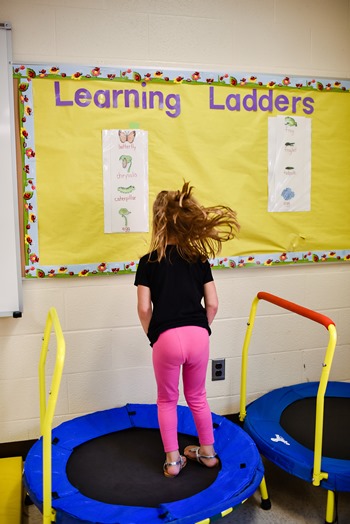 The goal is to build S.M.A.R.T. experts within the school, and within the region so these experts can train other teachers. “Going forward, the region can be sustainable, not just the school,” said Kittleson. “The end goal is to build up the resources within the region.” The SMIF grant has also allowed ACTG to extend beyond pre-K all the way to third grade, which ensures all children have access to S.M.A.R.T. regardless of their early childhood experience. “What we like about that is as we think towards the future we feel that with the help of SMIF we are developing a viable model that other regions in Minnesota could use.”

In Lake Crystal, the future looks bright. Prange attended three workshops and has already received three years of mentoring from ACTG. Lake Crystal received their own grant from SMIF to provide discounted rates for teachers to attend the trainings which has helped them train 22 teachers so far. The grant is also supporting their work to bring S.M.A.R.T. to home providers in the community, extending beyond the classroom and into other areas of early childhood.

“This program is moving the needle to where early childhood needs to be,” said Kleven. “If it could be a foundation in every school it would make a huge impact on our children’s abilities to be learners.”