Moving The Needle On Rural Philanthropy

Home/Stories/Moving The Needle On Rural Philanthropy

Moving The Needle On Rural Philanthropy

Preston, Minnesota is nestled in the bluff region in Fillmore County, a stone’s throw from Lanesboro and only a forty-minute drive south of Rochester. For a town of 1,305 Preston has a wealth of amenities. When first entering the town, you’ll see beautiful baseball diamonds and tennis courts. As you make your way through the downtown you will notice renovated historic buildings, flags lining the streets, and a colorful mural. Each of these amenities exists, not to mention a myriad of programming opportunities in town, because of the generosity of the locals who give back to their community through the Preston Area Community Foundation (PACF).

“The community foundation has allowed Preston to continue to survive, and thrive,” said Dan Christianson, former PACF board member and owner of F&M Community Bank. Christianson was born and raised in Preston. After law school, he returned in 1982 to help the family business during the farm crisis. “I hadn’t originally planned to stay this many years, but Preston was a great community in which our children could grow up,” he said. Over the past 20 years, Christianson and his family have given back to the place they call home, and the foundation has been the organization of choice to steward that money. 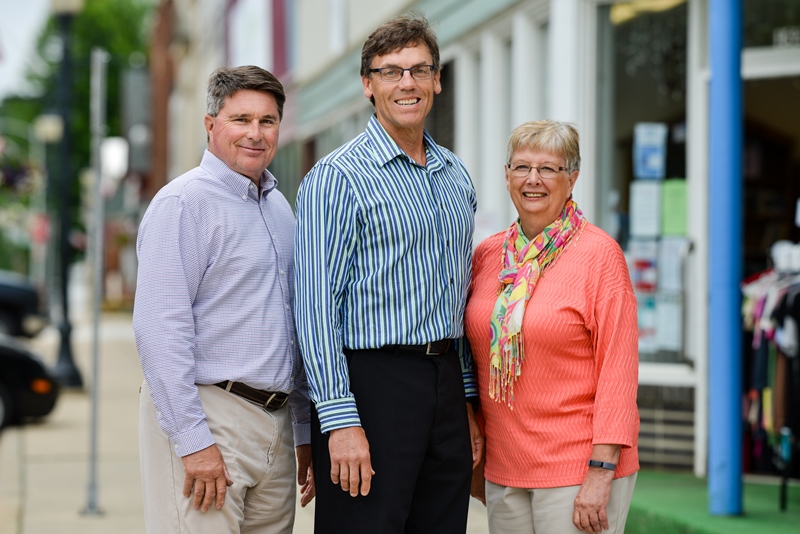 The Preston Area Community Foundation is deeply rooted in Christianson’s family history. In the 1980s, there was no good mechanism for locals to make donations to fund community projects. Christianson’s father worked with the City of Preston to establish an ordinance so that money could be donated locally. In the late 1990s Christianson and a friend started to explore options for how these donations could be managed. In 1997, after researching several options, they finally decided to establish a community foundation under Southern Minnesota Initiative Foundation’s (SMIF) umbrella.

SMIF, as part of its affiliate fund program, supports communities in capturing and retaining the philanthropic wealth, which has become increasingly important as $7 billion is expected to transfer between generations by the year 2030 in SMIF’s 20 counties. 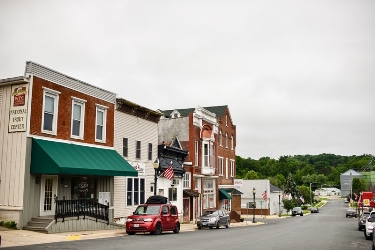 “One of the reasons we chose to become a fund within SMIF is because they offered to provide some matching funds and to provide administrative support,” said Christianson. “The foundation wasn’t going to have to worry about tax returns or investments. It makes it so much easier to have a community foundation operate in that manner.”

Christianson has personally put his heart and resources into the foundation as a board member, volunteer, and major funder. He also partners with PACF through the Christianson Family Foundation, a Donor-Advised Fund under SMIF.  The fund allows his family the opportunity to impact various programs that are close to their hearts. His bank has also offered a matching donation every year since the foundation began. “Preston and southeast Minnesota have been good to our family,” said Christianson. “We give back so that other residents can also have a good experience living in Preston and the region.”

Mary Zimmerman, a former board member, emphasized the importance of Christianson’s role in the foundation. “Dan is our biggest advocate,” she said. “We are so lucky to have a local bank and a president like him. He is so involved in the foundation and is always willing to offer resources as well as matching funds which really helps us increase awareness for fundraising.”

“Community Foundations are important because they support our local projects and programs, and because of that we can be a stronger and better community.” 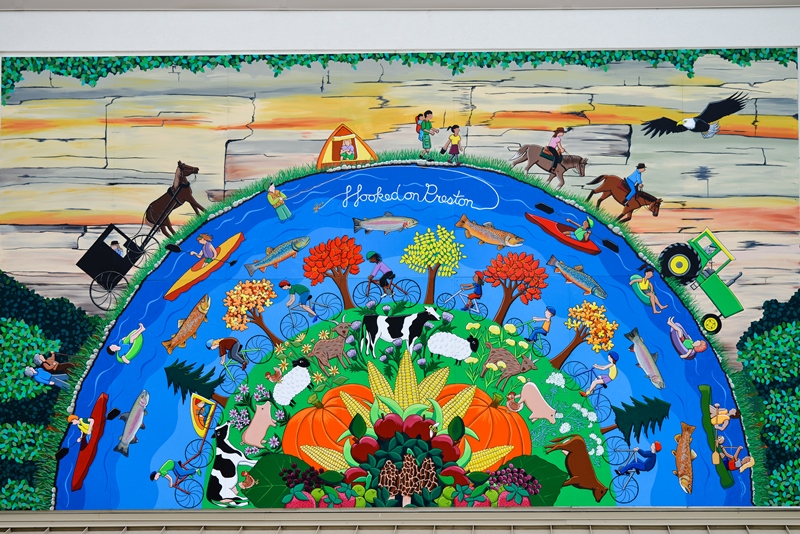 A pillar of the community

The community foundation consistently contributes to Preston’s vibrancy and growth. “We wouldn’t have as much going on if the foundation didn’t exist,” said Zimmerman. “Community Foundations are important because they support our local projects and programs, and because of that we can be a stronger and better community. I personally love the fact that I can donate to this foundation and know that the funds are going to stay right here.” Since its inception, PACF has granted more than $211,000 to almost 80 projects, and SMIF has provided more than $10,000 in matching grant dollars. 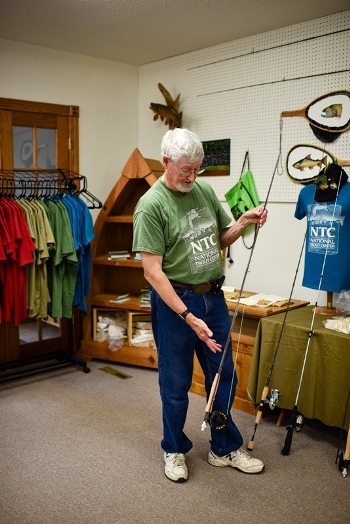 The National Trout Center in Preston.

“There are four main areas that most of the funding goes to,” said Chuck Aug, a current board member. “Most projects fall under the historical society, the school, tourism, and veterans.” The National Trout Center, located downtown, received funding for rental equipment for the many tourists that travel to the area for this purpose. The Fillmore Central School District has received funds for improvements at the baseball field, early childhood initiatives at the school, and multi-media and technology. Preston is also a community that prides itself on being “veteran-friendly,” so many of the foundation’s projects align with that theme, including a veteran’s memorial and a rifle squad for burials. The Historical Society received funding to restore the Milwaukee Elevator that sits at the trailhead on the edge of town. The foundation has also provided funding for community programming that fell outside of the four categories, like a Lego league start-up and a ceramics program.

“We like to work collaboratively in this town,” said Zimmerman. The foundation often gives startup funds in partnership with other local organizations. “The foundation is now being seen as a first resource as people begin to research funding for projects. Everyone is involved and has ownership. It gives us something to be proud of and a sense of community.” She explains that the mural project is a great example of this collaboration. The arts board received startup funds from PACF and was able to leverage that funding to get more grants. 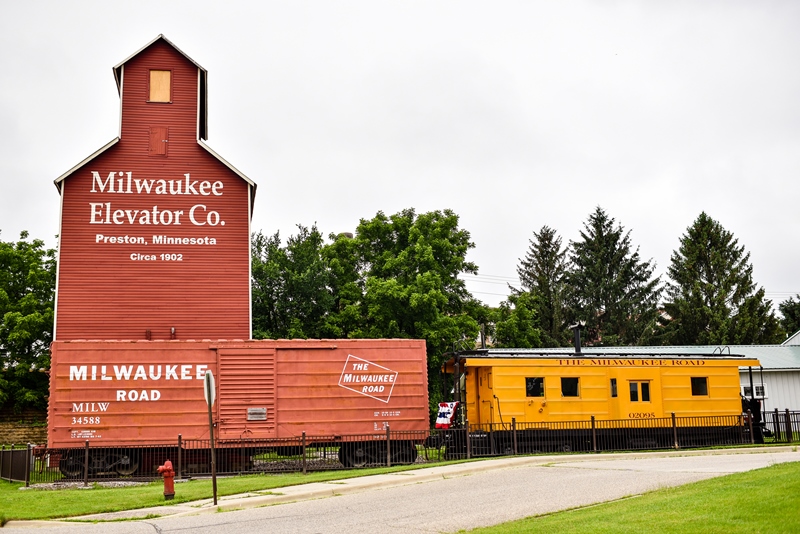 Energy around the foundation started to gain more steam about five years ago. The board decided to get involved in Give to the Max Day, a statewide day of fundraising in November for Minnesota nonprofits. Preston and the neighboring school rival Spring Valley Area challenged each other to see who could raise the most money for their respective community foundations that day. “It was a friendly rivalry, no real losers,” said Zimmerman. “This was a turning point in our foundation’s fundraising and public awareness.” Locals started becoming more familiar with the foundation and what it does for the community. Donations have increased substantially over the past few years. 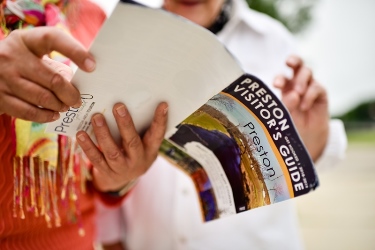 Preston is now one of 28 community foundations that are capturing the transfer of wealth in our region. The total assets for the Preston Area Community Foundation are now nearing one million dollars. Of that amount, $584,000 are endowed to support the community into the future, and SMIF has provided $64,000 in matching dollars to their endowment.

“The philanthropic awareness in the community is much more than it’s ever been,” said Aug. “There is one central place you can donate to if you want to give back to the community instead of a bunch of different organizations. Having a partner like SMIF, a regional organization, gives us a little more presence. When Dan matches, it really makes a difference. Our community is different because of it. We’ve got enough physical projects in town that people are starting to notice.” Aug also notes that there has been a change in how the neighboring community foundations work together. “The trails that connect these communities physically, they connect them in other ways too. We understand that everyone needs each other.”

Learn more about SMIF’s Community Foundations and our other Affiliate Funds.