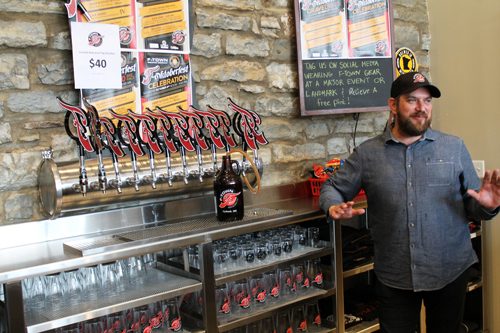 F-Town Brewing Company is a microbrewery located in the historic downtown district of Faribault in Rice County. In 2014, they approached SMIF for a start-up loan and began distributing craft beer across seven counties throughout south central Minnesota. After a strong start, F-Town Brewing is hoping to triple their sales this year and are distributing statewide.

In addition to the production floor, F-Town Brewing Company has a taproom adjacent to the brewery and has become a destination location for locals and visitors.

“We needed one win, someone to believe in and support us,” said Travis Temke, co-owner of F-Town Brewing Company. “SMIF was that win for us. They believed in us from the beginning and gave us something in our back pocket to go to the bank with. Having that SMIF loan in our pocket was like having a golden ticket…we could then go to the city, county, local bank and say ‘look, SMIF is behind us, can you support us, too?’ Without SMIF there would be no F-Town, and that’s the truth.”

F-Town Brewing partners with other local Faribault companies such as the Faribault Woolen Mills, River Bend Nature Center, local bed and breakfasts and others to strengthen the “Faribault” brand and local economy. If you’re passing, through, be sure to stop by and try out their seasonal lines – they’re always coming up with something new!