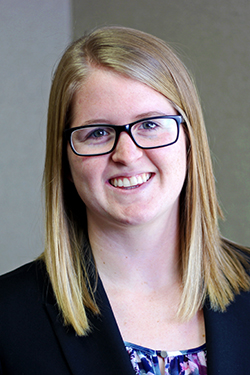 “I’m from Lacrosse, Wisconsin and was raised there but I was born in New Orleans, Louisiana. I call home now…well…that’s a tricky question! I’ve been living in Mankato for two years and am moving to southern Minneapolis, so I’m in transition.”

As the Economic Advancement Coordinator, what will you be doing at SMIF?

“Right now I’m pretty much focused on the Prosperity Initiative. That’s our initiative to promote minority owned business growth in southern Minnesota. We’re working with six businesses right now in a one-on-one setting. They will be getting mentors in the next month or two and we will be working with them monthly to push their businesses forward. I’ll also be helping the business team with whatever else is needed as I move forward and get further into the role.”

What most excites you about this position?

“The ability to help people. Southern Minnesota is such a unique place in terms of its culture, geography, location, people…but we aren’t a more progressive state like New York or California. So I feel like we aren’t used to seeing the shifts that are taking place in southern Minnesota in terms of things like the culture and demographic . Exciting things are going to be happening here and I’m excited to be a part of that. Southern Minnesota is very strong and has some great initiatives region wide, so I’m also excited to be in a position to learn from the other organizations in the region that is already helping others. This way I can learn from others and be better equipped to help the people of southern Minnesota with this bigger change that is happening.”

“The outdoor spaces are wonderful. Hiking and being on lakes…I don’t think that’s accessible everywhere I’ve been. The people as well;  I think that has something to do with the fact that I know people here. I mean, you feel home…wherever home is! Also, being in business, the small business community is pretty strong here in southern Minnesota and in the next five to ten years, it will become a lot stronger. That’s one thing that kept me here instead of going to a big city: the amazing potential for great things to happen in this region.”

What’s the most exciting thing you have planned for this summer?

“Well, I did a month in Europe, so I don’t know if anything will be able to top that through the rest of my summer! I did eight countries; I nannied for the first two weeks and then visited friends the last two weeks. It was a great time to relax and sit by the ocean. But coming up in the summer I’m going zip lining with my family and skydiving with some friends. Those would be two more adventurous things. But otherwise just hanging with family. My grandparents live in Wisconsin so going to visit them, playing cards, doing a lake house weekend…just relaxing with them.”